BBC News - Gary McKinnon extradition to US blocked by Theresa May

BBC News - Gary McKinnon extradition to US blocked by Theresa May

Sense at last.
Posted by Unknown at 13:02 No comments:

The iPhone 5 bores me so much that I can't even be bothered to blog about it.
Posted by Unknown at 17:14 No comments:

Just a quick entry, but this image sums up my thoughts, and I wanted to test the Blogger app. 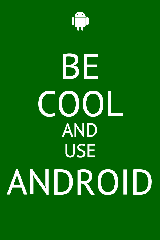 The Cult of Apple

Oh man, this is going to be a complex one...

Ok, this is mostly about Apple's iOS vs Google's Android. Let's for a change drop all the really technical stuff like the openness of Android, and just concentrate on the more basic stuff, like what your can do on the device, how it does it, what you can install, and how much you can customise it. I will assume some basic background knowledge though.

With iOS you can do many things. You can install a wide variety of apps, but only what Apple will allow you to do install as all apps have to be approved. iOS has a simple, easy to use interface. You can't customise it much though - Wallpaper, lock screen picture, and of course the usual sound preferences.

With Android it can also do many things. You can install a wide variety of apps. Ok, not as many as there are on Apple's App Store, but iOS has been around for longer, but there are not the restrictions on the apps like Apple impose. For example, I have a WiFi analyser app. Now, I know to many users this would not be important, but for me it is for testing WiFi networks, finding the optimal channel to use, and often just to find out why a free WiFi hotspot is not working with my laptop/netbook. You can also install apps from other sources. When it comes to customisation there is much more you can do - Wallpaper, home screens with short cuts and widgets, and of course the usual sounds etc - And this is just on my lower end 2.2 phone. With Android home screens you have a choice of what you have short cuts to, whereas in iOS your home screens are full with ever app you have installed. Yes, you can put them in folders, but you can't use the screens for anything else. Mind you, there are no widgets. I prefer having widgets, and a wallpaper I can see more of. Also, apps can add stuff to the system. For example, apps can add to the share menus. This means that you have a choice of how to share photos, and apps can share via other apps. Examples on my phone being, I can take a photo from the gallery and share it via Facebook, Twitter, Google+, Gmail, or even send it to BBC News! I can also take that photo and share it into Pixlr-o-matic and apply filters etc. Think of it as Instagram, but much better, more effects, and free add on packages. But I diverse. Say, I'm using the Guardian app and I want to share an article, well then I can share it via any of the installed supported apps, and they don't have to be supported by the Guardian app as they are added to the system's share feature.

They both also have a notification bar that pulls down from the top of the screen. Android has always had this, whereas iOS only got this in iOS 5.

Now, from the title of this blog entry you will gather that I have a problem with Apple. Here's why:

Now I'll expand on those in order.

Their app approval system has been known to be very random and picky. Emulation, for example is either not allowed, or restricted. A good example of this one was a Commodore 64 emulator that had BASIC. Apple made them remove BASIC. Why? How can an emulated, virtual computer affect the host OS? BASIC has since been allowed back in. Going back to my WiFi analyser, this would not be allowed. They don't like low level access to the system like that. When Google released their Google+ app, Apple would at first not allow it. Why?

Suing Samsung constantly. They seem to like doing that. Anything even remotely similar to their products, and they go the line of suing and banning.

A good example of this is once again against Samsung. They are attempting to put a ban on the US release of Samsung's Galaxy S III, citing the usual patent infringement. The S III has been reported by various sources of having nine or ten million preorders, beating any previous record of any other phone. Not liking competition much? Steve Jobs was determined to kill off Android, saying it was a rip off of iOS. Funny that, given how iOS got a notification bar a bit like a feature that Android had from the start.

Now to the cult thing...

Apple, more than any technology company has a huge following. Many of these fans take it to another level, almost like a religion. What ever Apple do or say, they follow. Like sheep. Drugged sheep. Mind controlled sheep. You get the idea. Some of these 'followers' are almost blind to any rival product. And smugness? Think of a really smug techy person. No, more than that. Now double it.

Well it's been and gone at last. Huge amounts of public money spent, an extra Bank Holiday to further add to the other three that would already slow down peoples' post, and of course the constant media barrage about two people we don't know getting married. I bet they were having constant orgasms in the offices of the Daily Mail and Daily Express. Thanks for the great timing of the death of Osama Bin Laden. It meant we actually had news coverage of something that really mattered. Now though we have the coverage of nothing, also known as their honeymoon. We don't know where they've gone, and I for one don't care. And on their return, yet more about them. I wish them well, and all that, they seem nice people, but there's proper news out there, stuff that really matters.